We are very excited about the new Kaweco pens announced for release in 2016. New colors will be released for many of the top selling Kaweco pens as well as brand new models and designs. Kaweco pens have been German engineered for over 100 years and their pens are aesthetically pleasing and functional but more importantly they write great. If you have never owned a Kaweco pen we highly recommend one of these new colors or models. 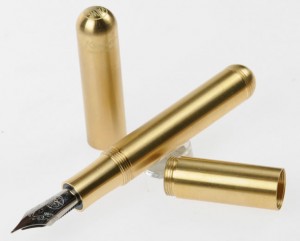 The Kaweco Supra Fountain Pen is an all new model designed similar to the Kaweco Liliput Fountain pen. The new Kaweco Supra pen has a slightly larger diameter barrel than the Liliput but it also comes with an extension. The optional extension does not have to be used but it makes the pen about 1 inch longer. This new Kaweco pen will be made with an all brass cap and barrel and a stainless steel nib that will be available in extra fine, fine, medium, broad, or double broad tip sizes.  We expect this new Kaweco Supra Fountain pen to be available in March of 2016 but we are now taking pre-order registrations for the pen.

Coming in April of 2016 will be new colors for each of the Kaweco Sport lines. The Kaweco Sport was first introduced in 1935 and continues to be the top selling Kaweco pen today. Each of the Sport pens have the same body and cap design but come in several different materials as well as different trims to choose from. Each pen style is available as a fountain pen, rollerball pen, ballpoint pen, or pencil 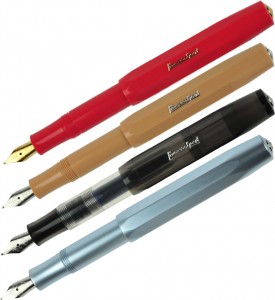 First is the Kaweco Classic Sport with it’s gold color trim and nib. Kaweco will be adding a beautiful red to this line.

Next, the Kaweco Skyline Sport which is fairly new with it’s silver color trim and nib will be seeing a new brown Cappuccino color.

The Kaweco ICE Sport is a transparent cap and barrel demonstrator style pen. A new black will be added to this line.

The Kaweco AL Sport line is made from an all aluminum cap and barrel making the pen even more durable. Kaweco will be adding the new color, Ice Blue, in June 2016 to the AL Sport line.

If you are interested in any of these new pens contact us and we can add you to the pre-order list to notify you as soon as the pens arrive. Also, please let us know what you think of each of the new Kaweco pens by leaving a comment below.