Pilot 100th Anniversary Ink commemorated the Pilot Namiki 100th anniversary in 2018. To celebrate the massive milestone, the company released a series of seven Maki-e fountain pens each representing one of the seven Gods of Good Fortune. Along with the Maki-e pens, Pilot released a set of seven complimentary, limited edition ink colors representing the same seven Gods of Good Fortune. Pilot’s 100th Anniversary inks are created under the Iroshizuku platform using the popular Iroshizuku bottle and packaging without the “Iroshizuku” branding.

Continue reading for a chance to win the bottle of 100th Anniversary Pilot Ebisu ink we used for this review. 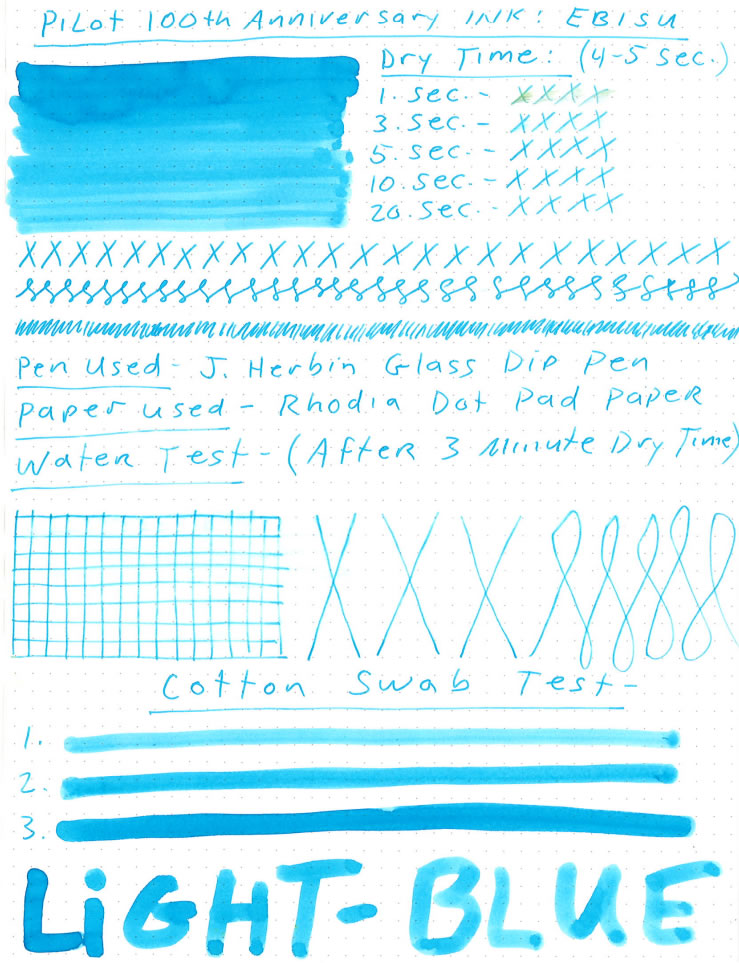 During our review of Pilot 100th Anniversary Ebisu ink, we found the following traits that you may find helpful when choosing your next ink color:

Pilot Ebisu ink comes in the distinctive Iroshizuku ink-well 50 ml. glass bottle, which is one of the best ink display bottles currently on the market. The glass bottle is heavily weighted with a well-designed internal ink well that allows users to gather up the last few drops of ink with their fountain pen. The lid is large and faceted, which makes it pretty easy to open and close.

Pilot 100th Anniversary Ebisu ink retails for $30.00 in the US but is available for less at Pen Chalet. This is a little more expensive than standard Pilot Iroshizuku inks, but since this is a limited edition ink and one of the first new “Iroshizuku” ink colors released in years, it seems well worth the additional cost.

We found absolutely no bleeding during our review of Pilot Ebisu ink, even during our cotton swab test.

During normal use, we experienced no feathering using the glass dip pen on Rhodia dot pad paper. Even during our water test we saw almost zero additional feathering, which is quite unusual for a non-waterproof ink.

We conducted a water test during our review of Pilot Ebisu ink. During this test, we let an ink sample dry for about 3 minutes. Our results were very light color smearing and almost no additional feathering or line distortion. Although Pilot 100th Anniversary Ebisu ink is not waterproof ink, it held up almost as if it were.

Pilot Ebisu ink seemed to have some nice shading possibilities. From a deep turquoise blue to a lighter dusty shade of light blue, Pilot Ebisu ink will produce some shading depending on penmanship and which writing instrument is used.

Pilot Ebisu ink is a fun shade of light blue reminiscent of a sparkling calm sea representing good fortune. All the characteristics of this 100th Anniversary ink are fantastic from its dry time and shading to its Iroshizuku bottle and packaging. The ink is a little more expensive than regular Pilot Iroshizuku ink but will not be around for long as it is a limited edition release. For exceptional good fortune, pick up all seven colors! Happy Writing (and Anniversary) from Japan!

Enter to win the actual bottle of Pilot Ebisu Ink that Pen Chalet used in this week’s ink review:

This ink makes me want to go to the beach

This looks cool! The standard Iroshizuku line has some of the best behaving/performing, easy-to-clean inks I’ve ever used – and the colors are so vibrant too… I’m really looking forward to trying these 100th anniversary inks as well!

Is this the worlds wettest turquoise?

How gorgeous! I just love a pure clear turquoise ink! My current favorite ink is Noodler’s Rome Burning… quite different from this beauty, but I have room in my heart for many favorite inks 🙂

I would like to see organic studios inks.
Thanks for the review and giveaway

It would be awesome to win this LE ink

That is a beautiful light blue ink

Now Ebisu. Before,asa gao,kon peki and tsuyu kusa…its amazing how Pilot can produce the best blue inks in the market…

Such a beautiful color.

Current favorite ink is Diamine Night Sky. I would like to see more reviews on shimmering / sheening inks. Thank you!

That’s a beautiful light blue, so refreshing and rich. This would match perfect with my ordered custom 743 <3 I love it

Nice bright blue! A great addition to the lineup!

The Pilot Ebisu Ink absolutely beautiful. When will you kindly review some of the old standby inks such as Waterman, Parker and Sheaffer? Thanks.

This is a beautiful blue for sure. It reminds me of March’s birthstone.

This ink is gorgeous! It reminds me of Lamy Pacific, another turquoise, except it’s slightly lighter.

I’d love to see a review of the other Pilot Anniversary inks!

This is a beautiful ink I would enjoy using very much. Will you review some of the old standby inks such as offerings from Waterman, Sheaffer and Parker?

Awesome looking ink and bottle, thanks for the giveaway!

A nice blue. I would like to see reviews of the VInta Inks.

What a great blue!

Whoa, cool. This would be awesome. Would be interesting to see this next to Kon-Peki.

Favorite ink right now would have to be Momiji, for the Autumn season.

It would be great to see reviews of the new Sailor Manyo line once they arrive!

I have too many favorite inks to list them all, but one of my favorites is Pilot Iroshizuku Ku-jaku.

Please review some of the new Sailor flower inks!

I knew about the Maki-e pens, but I didn’t know they had accompanying inks too! Nearly everyone into fountain pens loves the Iroshizuku inks, and this anniversary blue really does embody prosperity. The shading qualities look great (anyone else notice the faint green?). It’s nice to see more Japanese and Korean ink reviews. Is there any chance of coverage for the Kyoto TAG lines, too? I’d really like to see some of them demoed sometime.

Pretty ink, it reminds me of some of the late summer skies we had this year

Lately, I love all sailor Inks. The Miruai is my current favorite.

The ebisu really is a lovely color. Pilot iroshizuku inks are all excellent but the blues tend to be darker, so a nice lighter blue is a welcome change.