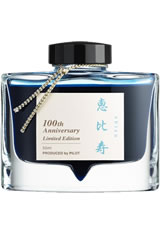 About the Pilot 100th Anniversary LE

The Pilot 100th Anniversary Limited Edition fountain pen ink comes in seven colors associated with the motifs of each god. Each color concept is Pilot's own interpretation of the god. The ink commemorates the 100 year anniversary of the Pilot pen company.

Colors include:
Ebisu (Light Blue): Ebisu, the god of plentiful fishing, now regarded as the god of happiness and prosperity. The light blue reflects the color of the sparkling sea.

Daikoku-ten (Yellow): Believed to be the god of treasure, Daikoku-ten has been depicted in sitting on a yellow straw rice bag on the fountain pen design.

Bishamon-ten (Red): Bishamon-ten, the god of financial good fortune. The red ink echoes the flames emanating from his halo depicted on the fountain pen.

Benzai-ten (Coral Pink): Benzai-ten, the only goddess among the Seven Gods of Fortune. The god of wisdom is depicted with a coral pink Kimono on the fountain pen.

Juro-jin (Purple): Juro-jin, know as the god of longevity and prolonged life, the purple color echoes the color of the Juro-jin’s Kimono, depicted in the fountain pen.

Hotei-son(Black-Green): Hotei-son, know as the god of good fortune and matrimonial happiness, the green-black color represents Hotei-son’s necklace, depicted on the fountain pen.

Fuku-roku-ju (Green): Taoism’s three virtues are health and longevity, are known as Fuku-roku-ju. Worshipped today as the god of personal virtue, Fuku-roku-ju green ink echoes the color of the turtle, depicted on the fountain pen, on which Fuku-roku-ju is riding.

* Special orders typically ship in 7-14 business days. However, occasionally due to manufacturer inventory, items can take up to 1-3 months. For a specific shipping estimate on your special order contact Customer Care.

Overall rating:
4.9
out of 5
(5 reviews)
Lovely color and excellent quality expected from Pilot.
Michelle
Rapid City, SD
5 out of 5

I ordered the Hoteison and it is one of my favorite green/black inks. Writes well with great ink flow and just a hint of the dark green even in an EF nib.
Annie
Olney, MD
5 out of 5

I got Ebisu and love the color. Really worth the purchase for someone who collects and loves Blue Inks.
DK
Pella, IA
5 out of 5

I really like the “Hotei-Son” I purchased. The color is a green-black - not so unique a color but the saturation, flow and drying time are great as with all Iroshizuku inks.
Keith
Dallas, TX
5 out of 5

This ink is beautiful! And what a smooth writer! I love it.
JoAnne
Santa Cruz, CA
5 out of 5

Ask your own question:
Product out of stock $ 0.00
Notify me when this item is back in stock.
price match