Kaweco Blue-Black Ink: German Pen Company, Kaweco, is known for its compact, distinctive yet functional Al-Sport and Classic Sport fountain pens used by officers in during World War II. However, Kaweco makes some wonderful fountain pen ink as well. Kaweco ink colors are basic colors such as red, blue, orange, green, purple, black and turquoise, but the ink’s characteristics and colors are above average for sure. 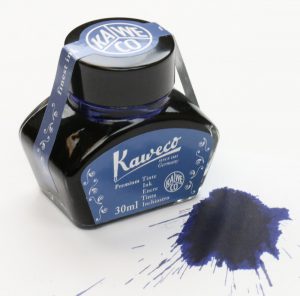 Continuing reading for a chance to win the bottle of Kaweco Blue-Black ink we used for this review. 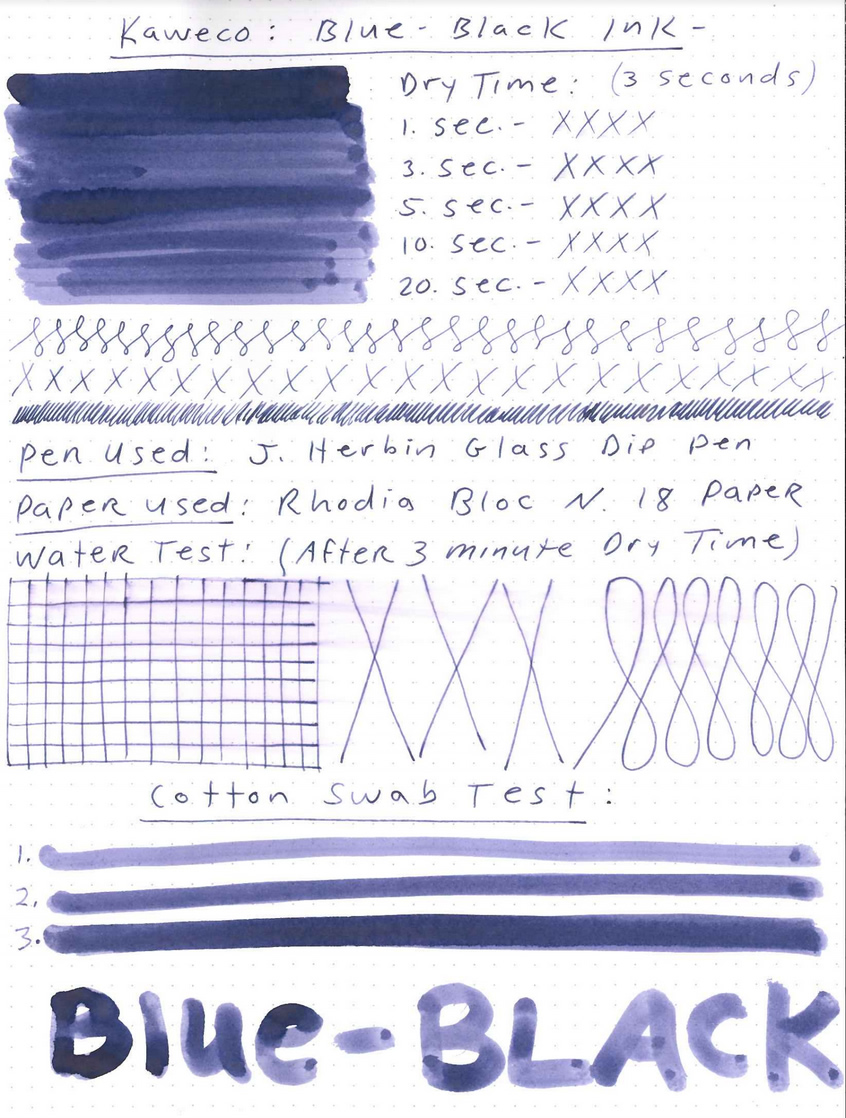 While testing Kaweco Blue-Black ink, we noticed the following characteristics that you may find helpful:

During this review we used French made Rhodia bloc paper with a J. Herbin glass dip pen. The dip pen tip is equivalent to a fine fountain pen nib.

Kaweco Blue-Black ink is available in only one size, a 30 ml. glass bottle. The bottle itself is functional as it allows for the user to collect every last drop of ink contained therein by placing the bottle on its side.

Another characteristic we have noticed with Kaweco ink is there is absolutely no bleeding, even during the cotton swab test.

Although Kaweco Blue-Black ink is not a waterproof ink, it held up exceptionally, well under the water test. There was only slight color bleeding, not much feathering and no additional bleeding during the test.

Conclusion about the Kaweco Blue-Black Ink

The color of Kaweco Blue-Black ink is super and it has a very fast dry time. The ink holds up well under water (although its not considered waterproof) and shows no feathering or color bleeding under normal use. The price is mid ranged for a 30 ml. bottle at a $16.00 retail price but with all of its other characteristics, the price is pretty reasonable for this imported German ink.

Enter to win the actual bottle of Kaweco Blue-Black ink that we used in this ink review:

I love how the shading on this ink!

This is a wonderful blue/black. I have been trying to find the perfect blue/black ink for a while now, so far the winner is Diamine but I would love to try this out and see where it falls.

Looks like a great blue-black. I have quite a few and would love to try this one.

That is a lovely color, but I’m most impressed by the dry time!

Kaweco inks have been on my list of well behaved inks for use at work. No bleeding or feathering on cheap office copy paper!

I’m in the middle of choosing an official Blue-Black to go in my “Blue ink set” for work. My black set is settled and so is my blue-green set. I’m ready to tackle blue.

I’ve heard really good things about the Blue/Black. Would love to win this one!

No former experience with Kaweco inks, but I could really go for this raven color.

I’d like to add water-resistant ink to my small collection. This blue-black looks nice. Thanks for a chance to win!

This looks like a very elegant and sophisticated shade.

Love Blue Bkacks and I think Kaweco doesn’t get enough credit for its inks. I just got Summer Purple and it is wonderful.

I love the color of this in the blue black is almost an indigo color.
Looking forward to trying it!