Colorverse Morning Star ink is just one of 12 total ink colors from Season 1 “Spaceward” inks and is #11 in the collection. Colorverse Ink Company is fairly new to the ink community but has taken it by storm with their space themed colors, packaging and bottle dynamics. Colorverse has taken their slogan, “colorize your universe” to heart and has produced three seasons of ink in various colors. Colorverse ink is made in Korea and from pure raw materials, which optimizes the PH balance making it easy on fountain pens. These dye based fountain pen inks have a nice flow, colors and sheen.

Colorverse Morning Star ink is a beautiful teal color but with more of a green tint. The ink also has some surprises in its packaging with 2 bottles in each box as well as “pen swag” that is unique and interesting. We are excited to carry all 3 season varieties of Colorverse ink, including Morningstar from Season 1, which we hope you will enjoy.

Continuing reading for a chance to win the bottle of Colorverse Morning Star ink we used for this review. 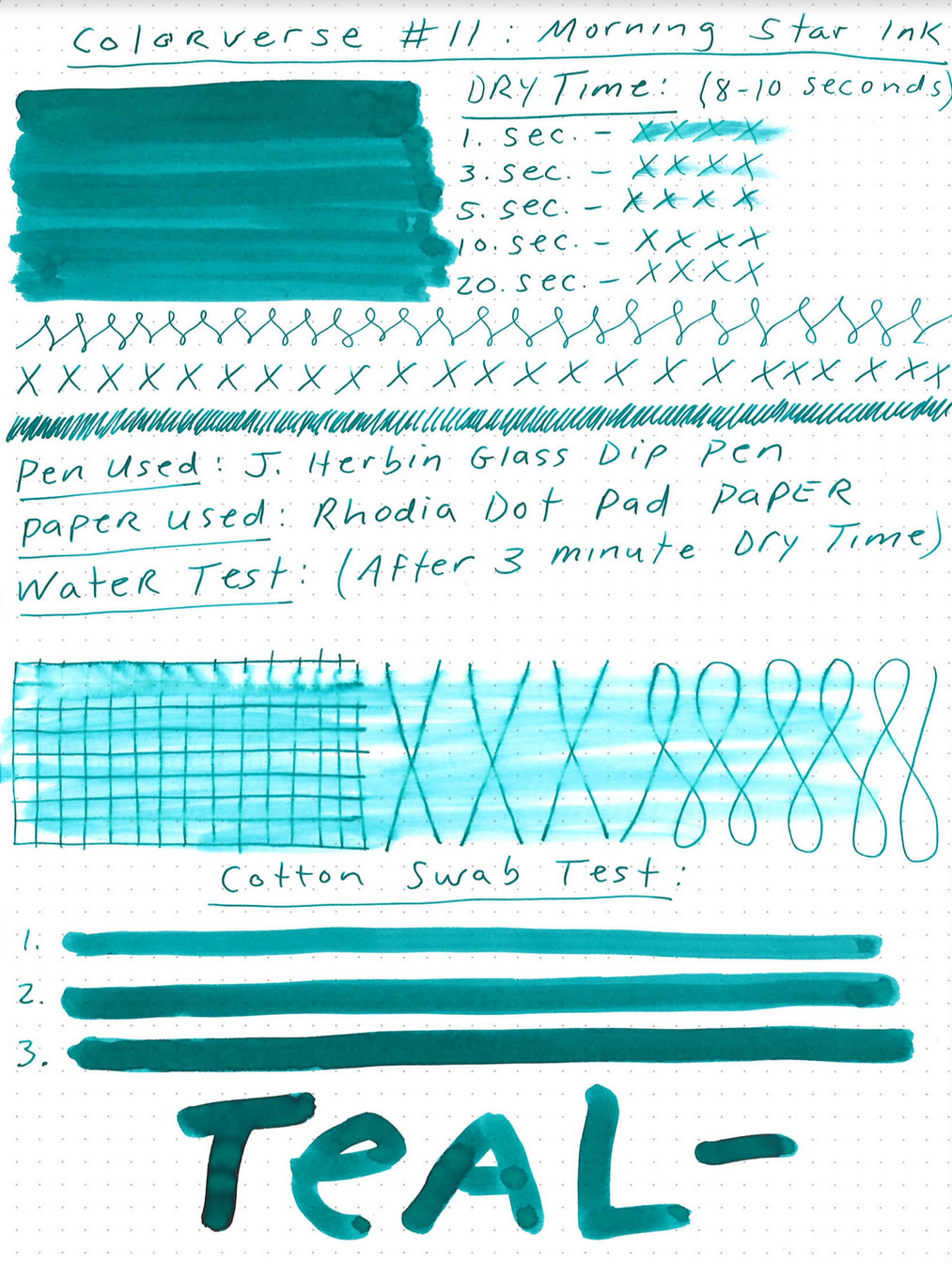 We found the following characteristics during our review of Colorverse Morning Star ink that you may find helpful:

For our review of Colorverse Morning Star ink we used a French made J. Herbin glass dip pen on Rhodia dot pad paper. The glass dip pen has a tip that is similar to a fine fountain pen nib.

This is where Colorverse inks get interesting and unique. When you buy any of the 3 Seasons of Colorverse inks, you get not one, but two bottles of ink. The inks from Season 1 and Season 2 inks come with two bottles of the same ink color, one larger 65 ml. glass bottle and the other in a smaller travel size 15 ml. glass bottle. Season 3, however, comes with two complementary colors of ink in the same bottles.

Both the 65 ml. and 15 ml. bottles have a distinctive and unique design, one just being larger. They are round bottles with a protruding nub on the bottom left of each bottle. Both bottles are packaged in the same cardboard box that has some unique protective features allowing for the safe transportation of the ink. Another nice feature, is that each box of Colorverse ink comes with “pen swag” including some stickers, a cardboard pen stand, bookmark and ink wiping napkins.

The retail price for this imported Korean ink is $36.00, a bit on the high side, but with the two bottles and uniqueness of each fabulous color, the cost is reasonable.

During our review we found the dry time using Colorverse Morning Star ink at between 8-10 second, which is not bad for a medium saturated ink.

We did not notice any bleeding while using Colorverse Morning Star ink, even during our ink soaked cotton swab test. This test was conducted with Rhodia paper, other paper brands and type may produce different results.

During normal use, we found absolutely no feathering while using Colorverse Morning Star ink on Rhodia paper. During the water test, we did notice some feathering, at the wettest points of the test, which is not unusual for non-waterproof ink.

Colorverse Morning Star ink produces some very nice shading, in addition to the possibility of dark reddish purple sheening. Rhodia paper is not known to let the sheen come out as well as other types of paper, but we still noticed a small amount of sheening during the cotton swab test. If you were to use something like a Tomoe River paper we would expect a higher amount of sheen.

We are very excited to carry a full complement of Colorverse ink, including all 12 Season 1 colors. Colorverse Morning Star ink is a nice dark teal color, making it usable in both the home or office. It has good saturation, a fairly quick dry time. It also has nice shading and sheening and flow well.

Although Colorverse ink is on the high side of the price spectrum, you do get a second bottle which you can share or keep one at home and the other at the office. Colorverse Morning Star ink as well as all of the Colorverse Spaceward inks from season 1 are out of this world and are sure to please. Happy Writing in 2018.

Enter to win the actual bottle of Colorverse Morning Star ink that we used in this ink review:

These bottles are quite interesting.

This is a beautiful shade—I’m a sucker for a nice blue green.

I’m definitely looking forward to seeing more of these inks!

Would you please review more of these inks from Colorverse?

This ink is a beautiful color. My favorite ink is Iroshizuko Tsutsuki (sp?). It’s a gorgeous pink that is very readable.

I still like Noodler’s 54th Massachusetts ink. The Blue-Black color is not my favorite, but it performs extremely well in each pen and on every paper, better than any other fountain pen ink. For color, I very much like SBRE Brown’s brown ink and Sailor Bungubox’s Piano Mahogany. Thanks for this review and the giveaway!

Fabulous ink review! I hope to see more reviews of the Season 3 inks 😀

Thanks for the chance. Pretty bottle and shade. I like to have Colorverse Andromeda ink.

I would love to try this beauty! I’m a sucker for teal inks!

Love the colour and the bottle looks interesting.

Love! It would be great to see another Colorverse ink, any of them.

Love the packaging on the Colorverse inks!

Another sucker for teal! Funny ‘cause there’s no other thing in the world where I favor teal! This ink looks good and “happy.”

The inks look really neat I’m trying not to buy new inks this year but these are calling my name!!!

I too am digging the Colorverse bottles.

Love this. I’ve been looking forward to trying it.

Love the reviews. Consistent style allows us to compare easily!

Great giveaway. Thanks for the chance to win.

I am so excited to try Colorverse inks. They seem absolutely fantastic!

Beautiful color…for the win I am entering!

Huh. I love the packaging and the two separate bottles. I will definitely try them for myself!
Will you do the new SE Lamy ink when it is released?

I love teal and this looks fantastic

I like a dark teal, and this is beautiful. Thanks for the review and a chance to win.

Thanks for doing the giveaway!

These inks look really cool. I can’t wait to try some.

While I like the two-bottle in one approach, as well as giving away pen swag with each order, I’m not sure I see anything particularly special about this ink.

This is interesting. Haven’t heard of this company

I really enjoy that their bottle shape is different. The colors look great too.

Beautiful looking ink. I am especially please since I have been moving more and more towards green in my teal inks.

Can you review Schrodinger’s Cat?

Me: I don’t need another teal. Also me: ooh another teal! Double bonus points for spaaaaaaaace

I would love to see more Colorverse reviews!

I’m usually not a fan of teal, but this hue is dark enough to be useful.

Would be a nice addition to my collection.

I’m really liking this teal color! I’m excited to try these inks! Thanks for the giveaway!

I’m looking forward to you carrying all their products.

Oh boy, I was just over on the PenChalet site drooling over the Multiverse color combinations and loving String/Brane and Schroedinger’s Cat so hard. Kudos on finding such an awesome ink company go introduce to us, your loyal readers. Even though it’s a teal/blue-green/aqua variant, I dare say the Morningstar is a must have in my book. It’s a bit different from the others, isn’t it?

I would like to see reviews of more Colorverse inks!