All About the Ink Maker: Colorverse

With over 80 inks on the market, you can safely say Colorverse is a standard in the industry. All of Colorverse’s high-performance inks are manufactured in Korea and come in powerful colors that tend to draw a crowd. Some Colorverse ink series feature “paired” inks with one larger bottle (65 ml.) paired with one smaller bottle (15 ml.) in a complementary ink color. However, their Mini series is one of their recently released ink series that includes single inks. Other ink series that offer single inks include:

All About the Ink Series: Colorverse Mini Ink Series

Colorverse’s Mini ink series features tiny or “mini” ink bottles in some of their most popular ink colors. This week’s ink, Sea Europa #9, was originally released as part of the Colorverse Spaceward Series that included 12 ink colors. The Spaceward Series was released years ago, and we love that they brought it back in the new “mini” size. In its original release as part of the Spaceward Series, Sea Europa #9 was $36.00, and that’s one of the things we love about the Colorverse Mini Series – you can get your pen inked with the same ink at a fraction of the cost.
Colorverse’s new Mini Series includes 64 bottles of previously released ink colors from several different Colorverse ink series. It also includes three new ink colors, all included in the Johannes Kepler 3-pack: Planetary Motion, Conjecture, and Somnium.

With Colorverse’s new Mini ink series, fountain pen enthusiasts can now buy a small sample size bottle instead of immediately committing to a large 65 ml. bottle of ink or buying a complete two bottle pair. (This is particularly advantageous if your favorite color is the 15 ml. bottle of ink in one of the paired inks). To see the different Colorverse ink series or to see what ink colors are currently available in the Colorverse Mini Series, check the inventory at PenChalet.com.

Colorverse’s Mini Series Sea Europa #9 fountain pen ink was originally released in Spaceward Series that contained a 65 ml. and a 15 ml. bottle of ink (in the same color). That’s a total of 80 ml. of ink. With the release of the Mini Series, you can now purchase a much smaller amount. The Mini Sea Europa #9 ink has been extremely popular in the short time we’ve had them in stock. Sea Europa #9 fountain pen ink is a beautiful dark pink salmon ink color with medium saturation. The ink shows up well on paper, particularly for a pink ink color.

*** You’ve done well so far, but don’t stop now. Read the full review. You haven’t even seen Sea Europa #9’s test results yet. We know you love seeing test results. Plus, you could maybe use some practice being patient…but if you simply can’t today, just skip to the end and enter to win the bottle of Sea Europa #9 used for this week’s ink review. Some days just aren’t meant for in-depth studying. We get it).

Colorverse Mini Series Sea Europa #9 fountain pen ink got put to the test this week. We ran all our standard tests, and we know you can’t wait to see how it went so… 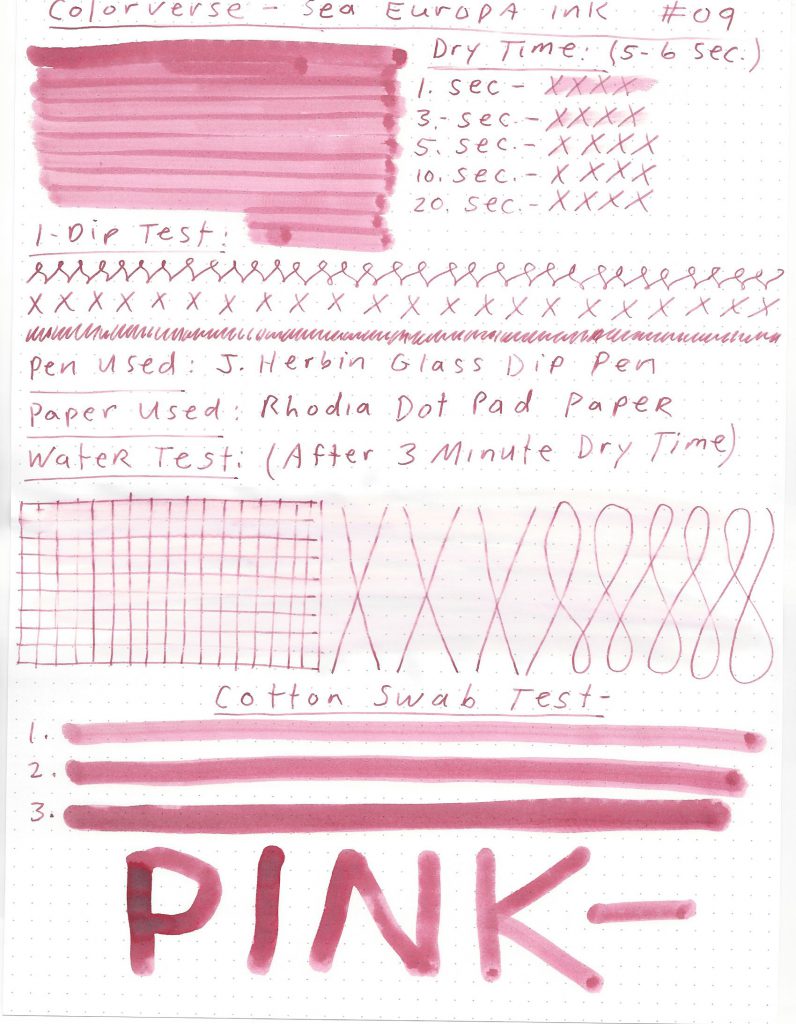 What Sort of Ink Bottle Does Colorverse Use?

Colorverse Sea Europa #9 ink is available in the original pair, which includes a 65 ml. and a 15 ml. bottle of the same ink color. However, the release of Sea Europa #9 ink in the Mini Series means you can now get this ink in the new 5 ml.mini bottle. Colorverse’s new “mini” bottles are identical in shape (just not size) to the 65 ml. and 15 ml. ink bottles, which is a good thing because at this point, we would miss that protruding nub if they tried to take it away from us. The mini bottles have a tiny opening, so Colorverse includes a small plastic squeeze ink filler with each purchase from the Colorverse Mini Series. Mini Series inks come in the standard Colorverse box, using the standard label and same presentation – it’s all just mini.

How Much Does Colorverse Mini Series Ink Cost?

How Did Mini Series Sea Europa #9 Ink Fair in the 1-Dip Test?

During the 1-dip test we dip the pen in ink once before putting it to paper to write. The test is intended to show how far one dip can write on paper. Sea Europa #9 ink very easily wrote across the paper on all three writing samples. You can see the three samples (S, X, and scribble lines) in the review image above. For each of the lines, the pen was dipped in ink only once.

How Fast Does the Mini Series Sea Europa #9 Ink Dry?

With normal use of Sea Europa #9, we saw no bleeding. We didn’t even see any bleeding during the heavy saturated cotton swab test.

Was There Any Feathering While Using Mini Series Sea Europa #9 Ink?

How Does the Mini Series Sea Europa #9 Ink Stand Up to Water?

Sea Europa #9 is not a waterproof ink, but we always include a weekly ink review water test. (For the water test, we let an ink sample dry for about 3 minutes before running a wet cotton swab over the sample). After putting Colorverse Mini Series Sea Europa #9 ink to the water test, we saw very light color smearing, but the lines were clear and legible (with some slight distortion and fading).

With the right nib and penmanship, someone well versed in shading will see a lot of possibilities here, with a dark salmon color to light dusty pink. If you are looking for a nib that allows ink flow variation, we suggest a stub or italic nib.

Colorverse Sea Europa #9 ink is reasonably priced. The lovely dark salmon pink color is appropriate for everyday use in the home or office based on its quick dry time (approx.. 5-6 seconds). The ink comes from Colorverse, a very well-regarded ink company, and arrives in their new, standard, mini 5 ml. ink bottle used in their recently introduced Mini ink series full of miniature bottles of some of their most coveted ink colors. Everything about these inks from the ink bottle to the label to the packaging is mini, and you can’t help but love it. Happy writing from Korea!

I love this ink!!! It’s probably my favorite colorverse ink. I’d love to see you review any of the inkvent diamine inks

Love the smaller sizes! I need to try ALL THE INKS! Smaller sizes make that possible.

I like the color of this ink! It’s fun without being unusable in everyday writing.

I would love to try this nice pink ink. Plus, I have been curious about the very tiny 5ml Colorverse bottle. Fingers crossed!

“You’ve done well so far, but don’t stop now. Read the full review. You haven’t even seen Sea Europa #9’s test results yet. We know you love seeing test results. Plus, you could maybe use some practice being patient…”

A great addition to the JITO line up. Between Brunch Date and Delicious Sleep somewhere! I’d love to try it.

I like muted pink look of the Europa Sea! It won’t shock the eyes like it would if it were bright

The little bottles are pretty cute. Interesting color; I like that it’s somewhat resistant to water and seems pretty well-behaved.

The sea is black the sea is blue,
the sea is red sometimes so true,
I’m the true affcianado fountain pen trooper
waiting to get my hands on this Europa

Colorverse is one of my favourite ink brands. Sea Europa looks like a lovely color. Also the space theming really talks to my inner geek