In these confusing times, we know how important it is to let the little things go. But it can still be challenging to focus on the big picture unless you actively cut stuff out of your life that really doesn’t matter. If it causes unnecessary stress, confusion, or frustration, maybe it shouldn’t stick around.

The Pen Chalet Name Confusion: How Do You Pronounce That Again?

For instance, since the very first day we took up the grandiose task of providing fountain pen world fans with their favorite products at great prices, our customers have experienced untold amounts of confusion over the correct pronunciation of the Pen Chalet name. No one tends to have a problem with the first ½ of the company name. Pen (/pen/) meaning an instrument for writing or drawing with ink, or to write or compose, enjoys almost 100% pronunciation accuracy. However, the pronunciation of the 2nd half of the company name, Chalet, varies greatly.

Why Can’t Anyone Pronounce Chalet: It IS an Actual Word in the English Language

Don’t worry; we don’t blame any of you. A lot of everyday English words are hard to pronounce (or badly pronounced even by native English speakers). We’re not complaining (even though making fun of other peoples’ pronunciation seems to be an accepted form of social entertainment). Complaining about someone else’s pronunciation is a bit of a fallacy when you consider two crucial facts.

We Can Blame the Frequent Mispronunciation of Chalet on the Spelling System:

One, English has no strict pronunciation rules, so it’s a bit more flexible than some other languages. For instance, different words often have different acceptable pronunciations in different regions. Two, the English spelling system operates irregularly, so the system itself is the most logical scapegoat for mispronunciation. The peculiar properties of English spelling usually lead people to mispronounce words they read. In all seriousness, the spelling system is to blame. The same letters and letter combinations frequently have different sounds in different words. When it comes to the Chalet in Pen Chalet, mispronunciations are often inspired by the fact that the “ch” letter combination often sounds like a “k” and that words borrowed from French (like chalet) have a silent “t.”

Cutting Out Unnecessary Confusion in One Sweeping Move:

The point was to simplify by cutting things out of life that cause unnecessary confusion and frustration, right? So, we’ll cut straight to the point. After much consideration and a lot of brainstorming and deliberation, our entire team is in agreement that we have the power to give you one less thing to worry about during these trying times. We’re going to solve the problem right here, right now…with a simple (but complete) re-brand of the entire company.

There were many choices when it came to choosing a new (easier to pronounce) name for the company, but one of the most common mispronunciations was Pen Shallot. (Maybe this indicates some type of connection between fountain pens and cooking skills, or maybe people involved in the analog world are also drawn to shallots instead of their more common, mundane cousins, the onions). But we’ll save these questions for another day. Once we decided on the company’s new name, the re-brand evolved naturally.

What Did We Include in the Pen Shallot Re-Brand?

You’ll notice that our website is already sporting our new look. The re-brand, based around the company’s new name of Pen Shallot, began with a new logo design. Previously the logo featured a graphic representation of a chalet, but as the difficult to pronounce chalet is no more, our designer replaced the chalet with a shallot. The new logo inspired an entire brand color update (that you’ll see reflected throughout the site).

The Perfect Day for a Complete Re-Brand of the Company: 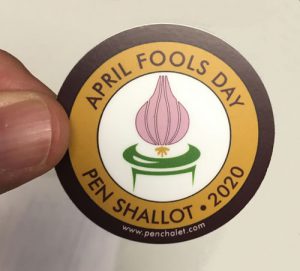 We hope that by undergoing this re-brand and reintroducing the company as Pen Shallot that we’ve created an opportunity for you to cut out one of the annoying things that cause you daily stress and frustration. We’re just doing our part to lighten your load, cut out the stressors and give you something to chuckle about once you remember that today is April 1st, and this is our version of the traditional April Fool’s joke. A joke we consider to be FOR you rather than on you. So much so, that we’ll be including a Pen Shallot sticker with every order placed today (while supplies last). We hope you enjoy it. And happy April Fool’s Day, everyone.

You all are the best, as always! Thank you for some much-needed and appreciated levity! Happy April Fools day to all!

Happy April Fools’ Day to you as well!

Pffft LMAO. That was great!

Glad you liked it!

I love this so much! Get me a sticker!!!

Nice choke, I almost choked on the echalotte.

As it is said “ Hook, Line and Sinker”

This was great! And I was a SUCKER. Thanks for the laugh!

I think your joke is inspired and original. I’m ordering a pen from you in deference of it, and because I’d love one of those stickers!

Thank you for some much needed giggles. Sending love from NYC

Wishing you the best and good health.

Wow. Y’all got me good! LOL

Love it! It took me a few seconds to realize what the date is! Now, if only the current issue affecting us all was only an April Fool joke…………

Thanks for the laugh And your great products and service. Stay safe and well.

Very Clever! The logo made me chuckle! Thanks for the laugh in these trying times.. ❤

Neat… That was fun thanks. Anything, rather the C word!

Lol, thanks I needed that 🙂

LOL I loved this!

I nearly brought my coffee through my nose this morning. Well done!!

Alright you got me! Of course, reading it at 4:10 am PDT made me a bit gullible, but I must admit — you prepared me for the day! Thank you.

Sorry guys but I think this is ridiculous. Pen Chalet at least denotes a “place” for pens. With “shallot” you may as well have named the company Pen Onion. I am almost 68 years old and I have never heard chalet pronounced in any of the ways you have listed. If this is a joke, it isn funny and if it’s not a joke then you need to hire some better marketing people. As much as I like your company I believe this is a mistake you will regret and you will be the butt of many unkind comments. I… Read more »

I really needed a good laugh today. And from my favorite pen company makes it even more perfect.

That definitely was something to chuckle about. Thank You!

That was excellent! My pre-coffee brain said huh? And then the date kicked in. Pen Shallot stickers should be a thing.

You had me for a minute!

I wasn’t planning on buying a pen today…..but now I am. Thank you for confusing the heck out of me and making my day

Yea…you guys really had me fooled there…

Oh, thank goodness it’s just a joke! I was thinking this is the most ridiculous name change I ever heard of! Good one!!

Even Pen Fanatics are undereducated! You did your best.

Love it! Embrace the suck! I’m almost disappointed that it is an April Fool’s joke.

I guess I didn’t get the joke this morning. Sorry, I really wasn’t expecting any attempt at humour with all that’s going on but I do understand and appreciate your efforts to provide a little levity.

Love it. Thank you for providing several laughs, giggles, and many smiles during these challenging times.

The new logo looks like a glass dip pen!

Thanks for some light-hearted fun! We can certainly use it in this heavy-hearted time.

Is it for real or an April fools joke? Anyway it was amusing of how many mispronounce the word

What kind of Luddite cant correctly pronounce Chalet?
Pls tell me this a marketing ploy, like killing Mr Peanut or renaming IHOP into IHOB. Because if you are realllly doing this and it is NOT an April Fool’s joke, well, I don’t even want to know you any more.

I find this very strange. It is hard to believe that those who write with fountain pens are unfamiliar with “chalet”.