Pull Tip Section out of the Barrel of the Pen 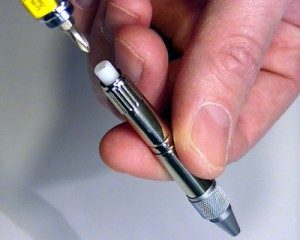 Pull the Refill out of the Tip Section

Step 3
Once the refill holder is unscrewed from the tip section simply pull it out along with the attached refill.

Step 5
Replace the used refill with a new refill by pressing the refill holder onto the end of the new refill.

Step 7
Press the tip section back into the barrel section of the pen.