All About the Ink Maker: Colorverse

Colorverse manufactures all their inks (80+) in Korea, and they’re well known for creating quality inks in strong colors that are usually presented inside intriguing themes. Several Colorverse ink series offer paired inks (65 ml ink bottle paired with a complimentary 15 ml ink bottle), but this week’s ink is from the new Office Series, which features stand-alone inks.
The paired inks are a lot of fun, but we can also really appreciate Colorverse’s newer ink series featuring stand-along inks. They now have three:

Colorverse’s Office ink series is available in single bottles (30 ml), instead of paired inks like some of the other Colorverse ink series. The Colorverse Office Ink Series includes several classic ink colors:

Colorverse’s Office Series Black fountain pen ink is a beautiful, standard, everyday black color that shows up well on paper with medium saturation. Colorverse Office Black has a nice, opaque color with a slight gold sheen with very saturated use. We would describe this black ink as very black – on par with last week’s Van Dieman’s Devil Black and Aurora Black.

*** Don’t stop now. Keep reading for a chance to win the bottle of Colorverse Office Series Black fountain pen ink used for this week’s ink review. (Or if patience isn’t your thing, skip the reading and scroll down to the bottom. We’ll forgive you). 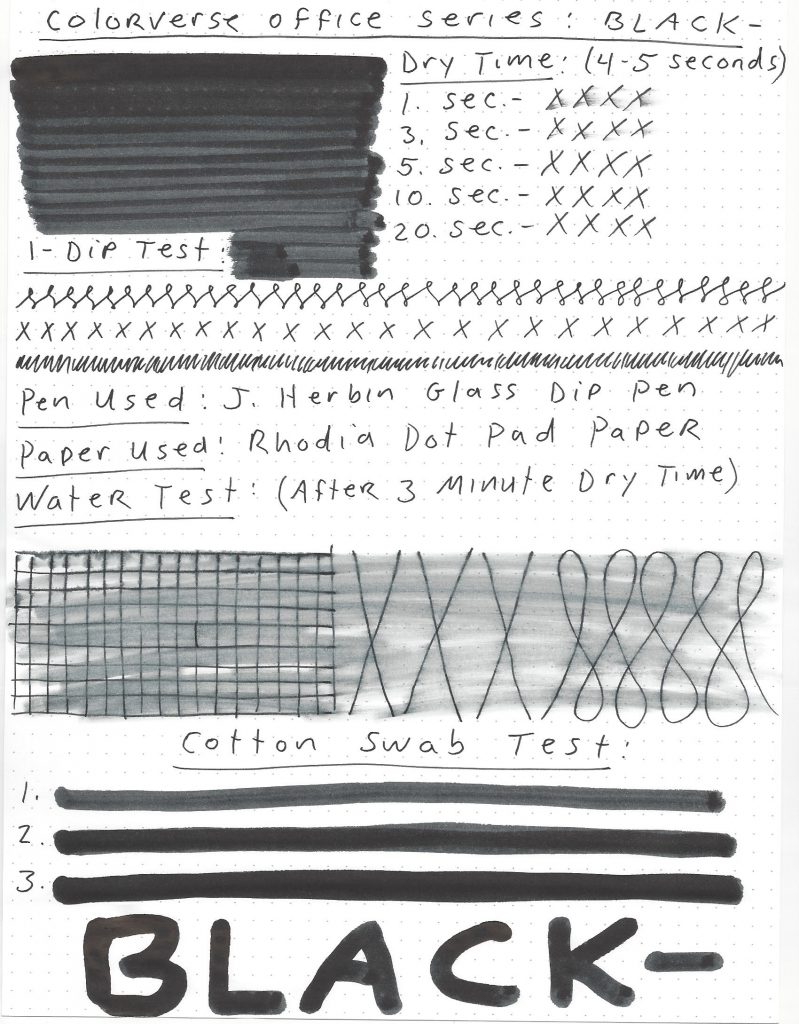 For this week’s ink review, we had some fun with Colorverse Office Series Black fountain pen ink. We ran it through all the tests to find different traits and characteristics you want to hear about before adding a new ink to your collection.

What Sort of Ink Bottle Does Colorverse Use?

How Much Does Colorverse Office Series Ink Cost?

How Did Office Series Black Ink Fair in the 1 Dip Test?

We applied a 1-dip test to see how far one dip could write on paper (dipping the pen into the Colorverse Office Series Black ink only once). This week’s ink very easily wrote across the paper on all three writing samples with ink to spare (one dip per writing sample: S, X, and scribble lines). See the photograph of the samples above.

How Fast Does the Office Series Black Ink Dry?

Was There Any Feathering While Using Office Series Black Ink?

How Does Office Series Black Ink Stand Up to Water?

This week’s ink is not a waterproof fountain pen ink. However, we always include a water test in the review. (For the water test, we let an ink sample dry for about 3 minutes before running a wet cotton swab over the sample). After putting Colorverse Office Series Black ink to the water test, we saw medium color smearing, which is reasonable for black ink. The lines were still clear and legible, with only some slight line distortion and feathering.

Colorverse Office Black ink has some slight possible shading traits if you have a nib that allows ink flow variation. (Consider trying a stub or italic nib if you are seeking ink flow variation). Since this week’s ink is a very dark ink, shading will not occur during normal use. Colorverse Office Black ink is also not a sheening ink, but at the wettest points of the cotton swab test, we did notice a slight gold sheen (mentioned previously). However, the gold sheen was not evident at all during normal use.

This week’s ink, Office Series Black ink, is economically priced. The nice opaque black color is appropriate for everyday use in the home or office based on its very fast dry time (approx.. 4-5 seconds). The ink comes from Colorverse, a very well-regarded ink company, and arrives in their new, standard, smaller 30 ml. ink bottle used in their ink series featuring stand-alone inks. If you’re always on the lookout for a solid black fountain pen ink or if you’ve been hoping to discover a great opaque black ink with a fast dry time, Colorverse’s Office Series Black may need to join your collection asap. Happy writing from Korea!

Must try this ink. I dont have any black inks.

Still looking for that perfect black. This is a nice one.

Colorverse makes a solid ink, I really like this dry time.

I’ve never tried Coloverse ink before–I would love to try this one! 🙂

Always looking for a new black ink to try! Thanks for another thorough review.

For a selection of colors that kind of seems boring at first glance, I’ve had great results with this line from Colorverse. I love their Blue Black, and I also use the Permanent colors when signing documents for my students. They may not be the most vivid or crazy inks, but they’re great performers for my more professional writing settings.

So, would this be considered a well-behaved black ink?

This would be a good ink for left-handed writers with such a quick drying time!

Always looking for a good black

I’ll try it for sure. Thanks!

I’d love to see how this stacks up against Noodler’s Borealis Blck in a side-by-side comparison!

Don’t have black ink yet surprisingly.

Nice that Colorverse is making an Office series. Can’t go wrong with black, but wondering if they will be making a waterproof line next!

Still looking for a black ink that doesn’t bleed and feather on bad office copy paper.