Pilot’s 100th Anniversary is upon us, and they are releasing some stunning limited edition pens and inks. These limited editions draw their inspiration from The Seven Gods of Good Fortune. Ebisu, Daikoku-ten, Bishamon-ten, Benzai-ten, Fuku-roku-ju, Juro-jin and Hotei-son each come depicted in Taka-Maki-e (Raised Maki-e) on seven fountain pens. While these beautiful pens are out of most of our budgets, Pilot also is releasing a line of Iroshizuku inks inspired by the Seven Gods of Good Fortune. Continue reading for the more information about Pilot’s 100th Anniversary Limited Edition Releases! 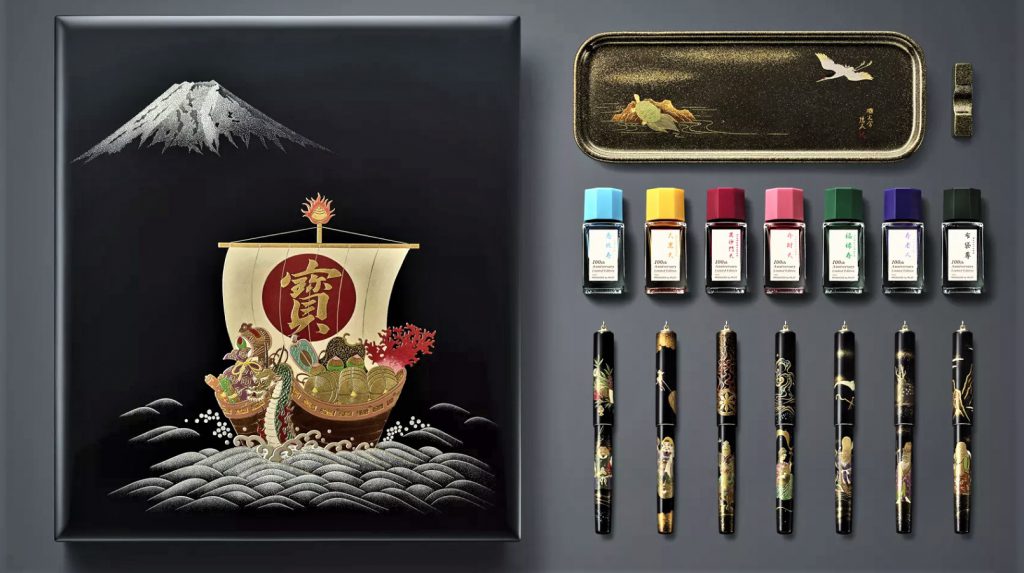 The 100th Anniversary: The Seven Gods of Good Fortune Set, limited to only 25 sets word wide, retails for $48,000 USD each. The Sets come with seven Taka-Maki-e (Raised Maki-e) Fountain Pens, stylized after the Seven Gods. Also, each set comes with seven bottles of ink, in seven colors tailored to the impressions given by each of “Gods of Good Fortune”. The bottled inks come enclosed in an exclusive box together with the seven fountain pens. Also, the sets include a pen tray on which a crane and a turtle, symbolizing longevity, come depicted in Togidashi Maki-e (Burnished Maki-e). The box that the set arrives with comes finished in Maki-e and Chinkin. Two Maki-e artisans depicted a treasure ship with Taka Maki-e, and a Chinkin artisan completed Mt. Fuji and the waves.

Please note that, at the beginning of March 2019, the Seven Gods will be offered individually on a limited basis (estimated retail cost $4,800). The mini Iroshizuku ink bottle set will also be available, as well as the 50ml bottle, again on a limited basis. 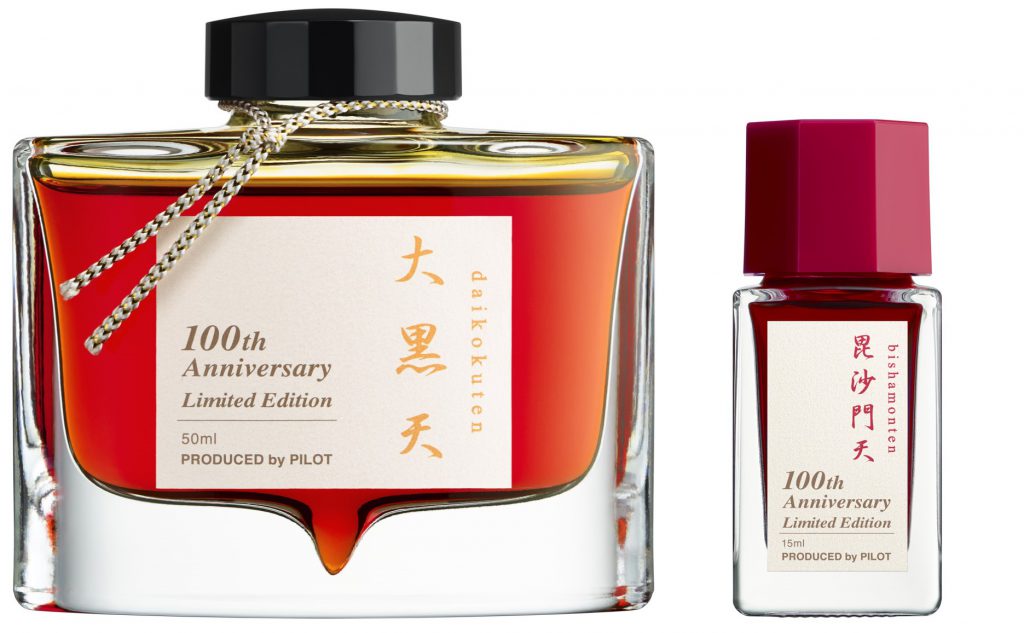 In ancient times, Ebisu was worshiped as the god of plentiful fishing. Now, however, he is regarded as the god of happiness and prosperity who makes everything from businesses to crops plentiful. This light blue ink reflects the color of the sparkling sea, also depicted on the fountain pen, around the rock on which Ebisu is sitting.

Daikoku-ten is believed to be the god of treasure as well as happiness, prosperity and better fortune that rules food and wealth. The yellow ink echoes the color of the straw rice-bag, also depicted on the fountain pen, upon which Daikoku-ten is sitting.

Bishamon-ten is believed to be the god of financial good fortune and competition. The red ink echoes the color of the flames, also depicted on the fountain pen, emanating from the halo that is floating behind him.

Benzai-ten is unique among the Japanese Seven Gods of Good Fortune, in that she is the only goddess. Today, she is worshiped as the god of wisdom, and is said to represent the virtue that exists in a marriage bond. The coral pink-colored ink echoes the color of the Benzai-ten’s Kimono, also depicted on the fountain pen.

Taoism’s three virtues which are the perpetuation of one’s descendants, health and longevity, are known as Fuku-roku-ju. Today, Fuku-roku-ju is worshiped as the god of personal virtue. The green ink echoes the color of the turtle, also depicted on the fountain pen, on which Fuku-roku-ju is riding.

Juro-jin is worshipped as the god of longevity and prolonged life as well as wealth and longevity. The purple ink echoes the color of the Juro-jin’s Kimono, also depicted on the fountain pen.

Hotei-son is widely regarded as a god of good fortune and matrimonial happiness, believed to impart riches, status and prosperity. The black-green ink echoes the color of Hotei-son’s necklace, also depicted on the fountain pen.

Mount Fuji is a revered symbol for all of Japanese Culture. The picturesque beauty of Mount Fuji has captured the hearts and creativity of many in Japan and around the world. The Mount Fuji Fountain Pen represents the culmination of all the Maki-e techniques Pilot has gained over the years. You can find these techniques in the the blanket of snow atop Mt. Fuji, the depicted pine trees, and also the mountain’s landscape. The entire fountain pen comes finished with a Shishiai Togidashi Taka Maki-e (Combined Raised and Burnished Maki-e) finish. The Emperor Fuji Fountain Pen retails for $9,600 USD.

The Yukari Fuji & Meiji-Maru Fountain Pen takes it’s inspiration from Mount Fuji and a real sailing ship. Meiji-Maru counted the Emperor Meiji as one of her many passengers before being retired to use as a training vessel. Both of the company’s founders, Ryosuke Namiki and Masao Wada, sailed the Meiji-Maru during their training. The expert who safely guides many vessels at the head of a convoy at sea is called a “pilot”, or ‘he who guides the course of a ship’. The company name “PILOT” was imbued with thoughts of becoming a company that would guide the course of the industry. With all this in mind, the Meiji-Maru was made with blue lacquers, the image of Mount Fuji on the cap, and also depicts the gallant figure of the “Meiji-Maru” grandly sailing towards on her next 100-year voyage with Taka Maki-e (Raised Maki-e). The Yukari Fuji & Meiji-Maru Fountain Pen retails for $1600 USD.

Make sure you sign up to our e-mail newsletter so that you don’t miss any of these pens or inks! Also, make sure to sign up for our blog, so that you can stay up to date on all things new and happening! Happy 100th Anniversary, Pilot!

Wow truly a wonderful set really showing some very high level of craftsmanship, as noted not “everyone” will be able to afford one of these but nice to know that these are out there