Colorverse is taking the world by storm even though it is fairly new to America. Only a few select retailers carry this Korean ink. Currently, 3 “Seasons” have been released as well as a limited edition Voyager 1 ink set. We are very excited to announce that Colorverse Season 4 will be released in July of 2018! We will carry all of the new Season 4 inks. Lights on Ceres ink is from the Colorverse Season 1 “Spaceward” ink collection. It is a nice dark shade of pink, which shows up dark on paper. The wetter lines will actually produce a dark red, burgundy almost black outline. Colorverse Lights on Ceres ink is one of 12 inks from Season 1.

Continuing reading for a chance to win the bottle of Colorverse Lights on Ceres ink we used for this review. 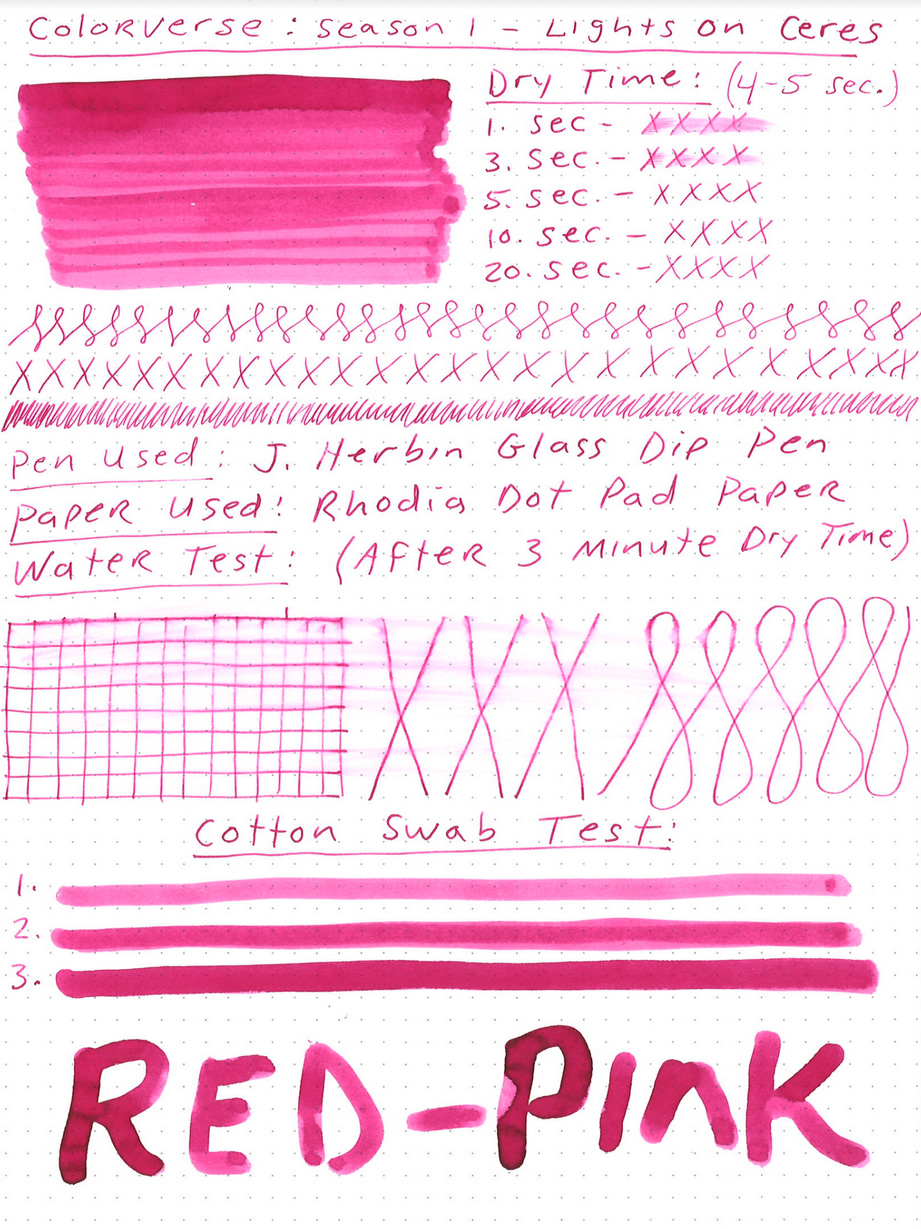 During our review of Colorverse Lights on Ceres ink we found the following traits that you may find helpful when chosing your next Colorverse ink color:

We used a J. Herbin glass spiral dip pen on Rhodia dot pad paper during our review of Colorverse Lights on Ceres ink. The glass dip pen has a tip that is similar to a fine fountain pen nib.

The retail price for Colorverse Lights on Ceres ink is $36.00, which includes both bottles of ink, thus 80 ml. in total. This price point makes it on the high side. However, due to the two bottles and large quantity of ink you get, it’s a very reasonable price. As well, each bottle has to be imported directly from Korea, which does affect the price.

During our review of Colorverse Lights on Ceres ink we found absolutely no bleeding on Rhodia paper, even during the cotton swab test.

We found no feathering during our review of Colorverse Lights on Ceres ink during normal use on Rhodia paper. Even during our water test only slight feather was noticed.

Colorverse Lights on Ceres ink produces some nice shading characteristics. It shades from darker pink-red lines, to light soft pink lines. There are several variations in between depending on the nib used and your penmanship stroke.

Colorverse Lights on Ceres ink is a nice color that pink/red lovers will really enjoy. Colorverse in general is fantastic; the bottles are unique and they perform just as well, if not better, than some of the best inks on the market. We carry all 3 Colorverse seasons, and we even a few of the limited edition Voyager 1 inks left in stock. Happy writing to infinity and beyond!

Enter to win the actual bottle of Colorverse Lights on Ceres ink that we used in this ink review:

Please do some comparisons to fairly new companies such as Colorverse and any other fairly new one. Thanks.

I wonder how these are compared to sailor, who’s price went out of my budget when they switched the bottles

A lovely shade of pink.

I am glad this ink has been reviewed. Saw it at the Atlanta Pen Show and could not decide whether I wanted to purchase or not and now I know this would be a wonderful addition. It reminds me Momijii for some reason.

Nice ink – pink isn’t my thing, but this is usable in certain situations.

I’ve been wanting to try the Colorverse inks for a while. Wonder how this ink color compares to Pilot Yama Budo.

I love this ink! Thanks for the review.

I’m so excited I won! Can’t wait to try it out!

This ink looks similar to Iroshizuko Tsutsuji in color.

This color is amazing! I love reds and pink inks. This one is so vibrant

I really think the concept behind these inks is so interesting and this looks like a great color!

I’m surprised at how well the ink dries and holds up under a water test. It seems to me that a lot of inks out there, the higher the saturation the more vulnerable they are to water. This ink is not only very pretty, but quite functional. I haven’t looked into the colorverse inks because of the price. Sure I’ve seen them in all the blogs and forums, but haven’t been willing to consider them. Now I might.

This is a really beautiful colour. I am so enamoured by the wonderful brand out of Korea!

We all need more ink.

Those inks are just too dreamy! I love their branding!

I bet my wife would like this ink. I’ve been trying to get her into fountain pens lately.

My favorite inks ate the sheen monsters, but they are all so similar. Please review some non blue sheeners. Thanks!

Has Colorverse put out an “bad” inks? I don’t think so.

I’d love to try a Colorverse!

Great review-thank you! Would like to see a review of Colorverse ‘Andromeda’ and ‘Sea of Europa’ in future posts. Also, have you thought of showing a swatch from two or three similar colors to the color under review, for comparison? Thanks again!

This is a nice colour & Im usually not a pink kind of girl! Thank you for showing it to me! God Bless & the Love of Christ to You All!!

I have a couple of these inks and I enjoy them quite a bit.

I don’t really have a favorite ink, but my favorite color of ink is definitely pink.

Love this color!! Been wanting to try this brand for a while.

I would like to see some reviews of various iron gall inks.

Oh man, Colorverse needs to slow down. My poor wallet!

That is a hot pink for me. It reminds me of Tsutsuji or even Momiji.

Lovely color but I must admit I’d like some Colorverse ink just to have that bottle!! Ha!

Lovely color and packaging. I’ve been wanting to buy some Coloverse ink but have been waiting to finish some of the ink I have.

Great color! Thank you for your review!

Review more of the Colorverse–some of the grays and blues. And some Organics Studios

nice ink. How about Diamine Syrah?

I really like the Colorverse Dark Matter that I have, and this also looks like a cool color.

I like the bottle – and the colour is amazing

You have the best giveaways. Thanks.

I love the few Colorverse inks I have! Particularly Gravity Wave!

I need to try SO many more inks, but I’m currently loving J. Herbin’s Poussiere de Lune. This one looks like a lovely red-pink that I’d love to try, though!