Visconti celebrates 30 years of luxury pen-making this year. In celebration they are releasing the a completely new pen, Visconti Mirage Pen. This pen has a entirely new concept, new nib, and new color palette! The beauty of the Mirage, despite its name, is no illusion. Read on for all of the exciting details about the Mirage. 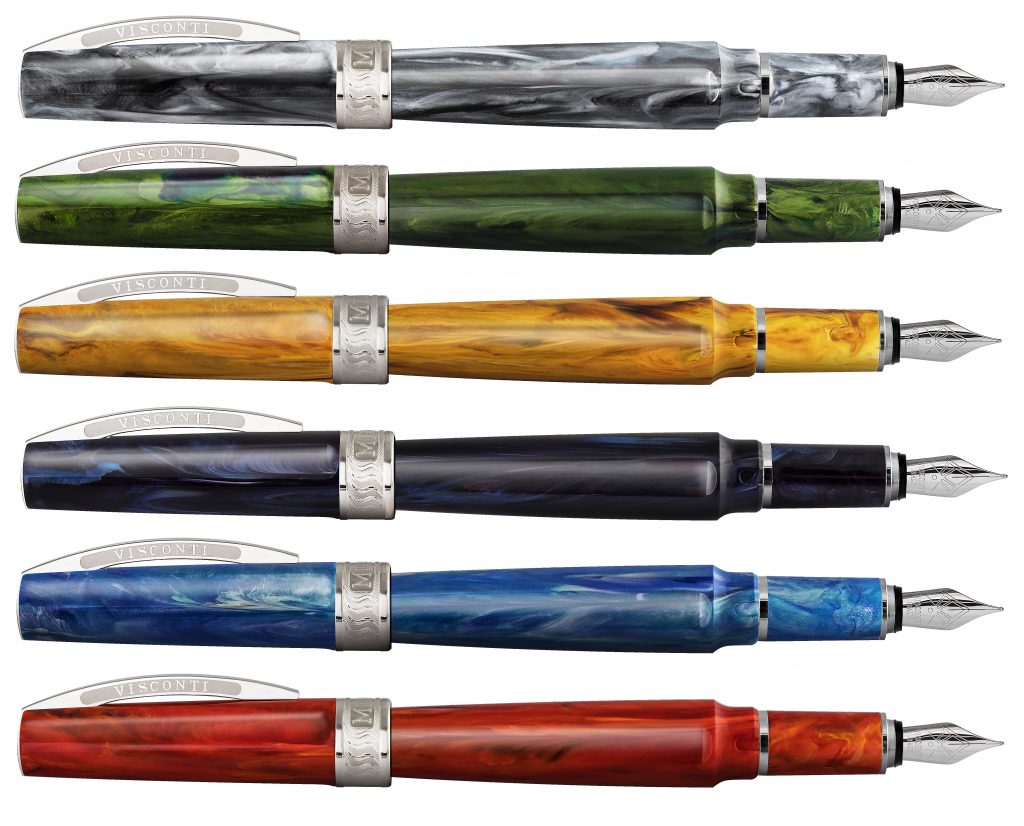 There are many innovations that the Mirage brings to Visconti’s table. First and foremost, the grip section is made of the same vegetal resin material as the rest of the pen. You get an uninterrupted visual appeal from this slight aesthetic change. The Visconti Mirage Pen comes with a magnetic cap, but with improvements. The brand new design comes with guidance grooves, resulting in a cap that does not rotate or move once capped. Each Visconti Mirage fountain pen comes equipped with Visconti’s new German made steel nibs, and are available in F, M, or B. In addition, the traditional Visconti Clip has been slightly re-designed and manufactured to accentuate the three-dimensional aspect of the Mirage. Also, the My Pen Design comes strategically relocated from the cap to the bottom of the pen body, leaving the new clip in full view.

The Mirage is available in six new pearlescent colors: Amber, Aqua, Coral, Emerald, Horn and Night Blue. The collection is available as a fountain pen, retailing at $159 as well as the Visconto Mirage rollerball, retailing at $139. Additionally, the Mirage is entirely made in Visconti’s factory in Florence, Italy. Visconti plans to release the Mirage collection in late October 2018. Make sure to get on the Pre-Order list so you are notified when they are available! Remember, we have The Write Tools For the Analog Writer!

Any chance you will be getting any Visconti Mirage Ballpoint pens in stock soon. I would like to get all the colors if possible. Thanks, Rick