Inspired by racing, the new Limited Edition Visconti RaceTech pen series was born and realized by the Visconti founder, Dante Del Vecchio. Dante is an avid race fan and rider of MotoGP and Superbike racing. Visconti has even been the official timer for many racing events and Visconti pens are often given as gifts for the winners of international racing competitions. 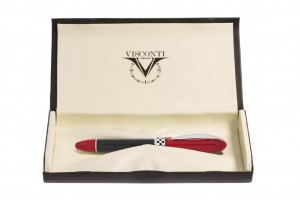 The Limited Edition Visconti RaceTech pen series has been packed with racing themes from the obvious black and white checkered flag to the lightening holes on the clip. The body of the pen of course is a black carbon fiber and red resin has been used on the cap as well as a ring between the section of the pen. The silver portions of the pen are all chrome plated.

Available as either a fountain pen or a rollerball pen, the Visconti RaceTech is limited to only 388 pieces world wide of each version of the pen. The Visconti RaceTech fountain pen features a Visconti tubular chromium nib and uses a cartridge/converter filling system. Choose from a wide assortment of nib sizes from extra fine, fine, medium, broad, double-broad or stub. Each RaceTech pen is packed in a luxurious gift box.

With all of the racing themes and the Visconti brand, the RaceTech makes the perfect pen for the motor sports fan. The Visconti RaceTech pen series will ship in late October, early but are available to purchase now! November Because the Visconti RaceTech is a limited edition it will not be around long so make sure you purchase it before it is too late!