Colorverse Ink Company recently has released their newest series of inks. Going away from tradition these new inks are non-spaced themed. This new edition, Wisdom of Trees, comes with two complementary colors in each box, one main color in a large 65 ml. bottle and the smaller complementary color in a 15 ml. distinctive Colorverse bottle. The Colorverse Wisdom of Tree’s inki comes in three color options, each depicting a historic tree: Coast Redwood & Redwood Forest; Methuselah Tree & Methuselah Grove and lastly Ginko Tree and Golden Leaves. The main color in the set, Colorverse Ginko Tree ink, is a nice dark burnt orange color. Also included in the set is a smaller 15ml bottle of Colorverse Golden Leaves ink.

The historic Ginko Tree has been found as leaf fossils dating over 270 million years old. The tree can grow to 50 feet high in many harsh environments and has the nickname of “golden hair”. The most beautiful aspects of this deciduous tree, are its leaves as they turn from green to a lively vivid golden yellow color each fall before they fall. If you have not seen pictures of a Ginko tree and its “golden leaves” look it up and you will be amazed at the tree’s beauty! Therefore, Colorverse Golden Leaves ink, as it should be, is a vivid golden yellow color that will brighten any page!

Continuing reading for a chance to win the bottle of Colorverse Golden Leaves Ink we used for this review. 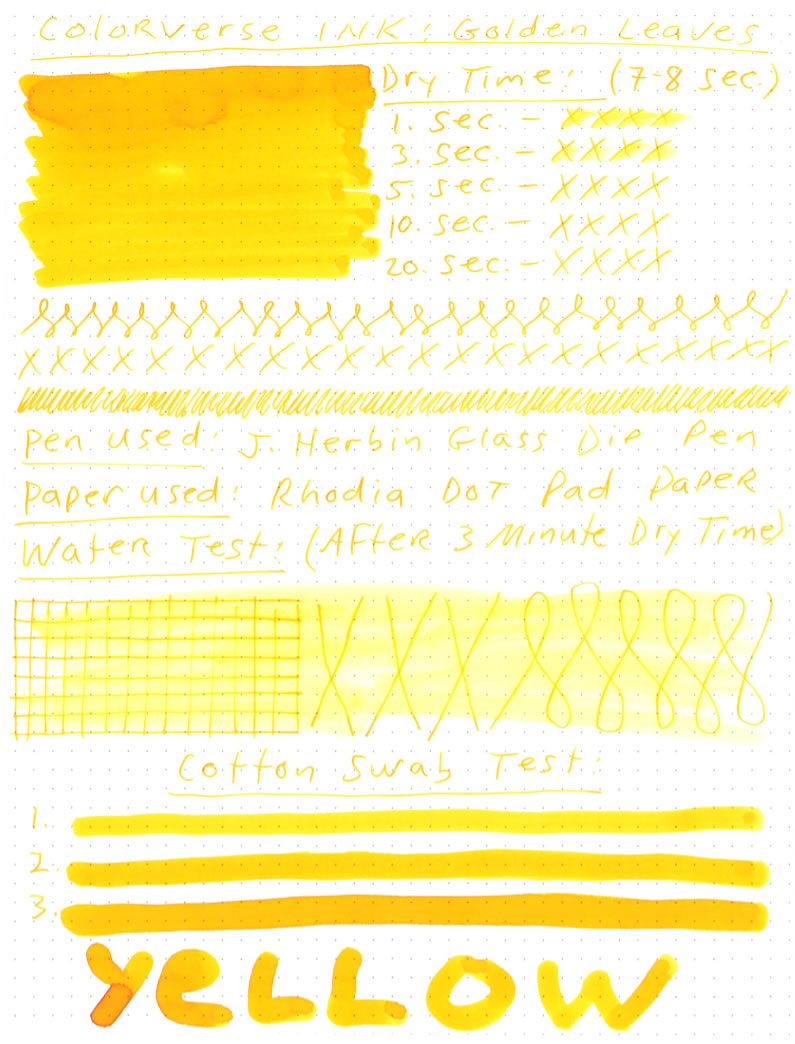 We found the following traits during our review of Colorverse Golden Leaves ink that you may find helpful:

For our review of Colorverse Golden Leaves ink we used Rhodia dot pad paper with a French made J. Herbin spiral glass dip pen. The pen has a tip that is similar to a fine fountain pen nib.

Colorverse has one of the most distinctive glass ink bottles on the market today. Both the larger 65 ml and the smaller 15 ml are identical in shape with one a smaller version of the other. The Colorverse bottle is a round functional bottle with a slight nub protruding out the left side. Colorverse Golden Leaves ink comes in the smaller complementary 15ml size glass bottle. This smaller scale makes the bottle opening a bit small, especially for a large fountain pen. Each Colorverse ink comes protected in a ingenious box design that allows the ink to arrive safe and sound, along with some Colorverse “pen swag”.

The US retail price for Colorverse ink, is $36.00. Although this makes Colorverse ink on the high side of the ink spectrum, the fact that each bottle is imported directly from Korea and there is a total of 80ml of ink makes it more reasonable. Unfortunately, you cannot buy the 65 ml. bottle of Colorverse Ginko Tree ink or the 15 ml. bottle of Colorverse Golden Leaves ink separately, as they only come as a set. The only way to buy one individually, is through our sample fountain pen ink option, where you can buy a 4 ml ink sample of these unique colors.

We found a dry time of approximately 7-8 seconds during our review of Colorverse Golden Leaves ink. This is a very reasonable dry time for non-waterproof ink with medium saturation.

Using Rhodia paper, we did not notice any bleeding during our review of Colorverse Golden Leaves ink during normal use. Even during our cotton swab test, we only found some slight bleed through at the most saturated parts of the test.

Again, during normal use we found no feathering at all with Colorverse Golden Leaves ink. Even during our water test, the lines remained pretty clear and distinct without a lot of line distortion.

We continue to carry a full complement of all Colorverse series of inks, including their special edition inks. Colorverse Earth Edition Wisdom of Trees series has produced some intriguing color combinations with fascinating stories behind the names used. Colorverse Golden Leaves ink comes from what many consider to be one of the most beautiful trees on earth, the Ginko Tree, and its fall-season leaves. This dark golden yellow color is interesting and unique. Yellow is not an everyday color, but its nice to have a yellow color on hand for that special project, note, journal or document marking project you may have. Colorverse Golden Leaves ink will shade well, has a reasonable dry time and comes in unique packaging. The down side, if you want to call it that, is that you get a larger complementary bottle of Colorverse Ginko Tree ink to go with your 15 ml. bottle of Colorverse Golden Leaves ink. Happy Writing from Korea!

Enter to win the actual bottle of Colorverse Golden Leaves ink that we used in this ink review:

This is one ink I need to try.

I would like to see a review of the new Taccia EBI (purple-red) ink.

Colorverse always knows how to make good inks. Still in love with String and Brane

Interesting color. Besides writing, how else do people use yellow ink in their fountain pens?

My favourite ink is Sailor Oku yama – if you could do a review on that one, I’d appreciate it 🙂

Wow! That is such a sunny, buttercup yellow.

I love how the color builds up in this ink.

I love this!!! I’ve been on an orange and yellow ink kick and love all things colorverse.

Yellow inks don’t usually catch my eye but this one has an orangey touch to it that I like a lot!! Colourverse inks are great for shading also!! God Bless & the Love of Christ to you all!!

What a fantastic color.

Oh my goodness, I’d love to have a yellow in this shade!!

Lovely ink! Hope I get to try this one. Thank you for the review and giveaway!

Makes me think of the sun 🙂

Is this a well readable ink?

Not a very readable yellow, I must say.

So far, I’m really enjoying sheening inks like Diamine November Rain and Krishna Sea at Night. But I’ve never tried anything close to a yellow before – would be really interesting!

While I really like the Colorverse Turquoise Ink, I like the Yard-O-Led / Turquoise # 948305 in a 28mL Bottle a little more and would like to see a review on this ink, Please.

Each time you ask us to leave a comment, I ask about you taking a look at some of the old standards like Waterman and Sheaffer inks. Maybe one day!

A fun sunny color! Surprising that it was still readable after water exposure. Colorverse comes out with some interesting inks and it is always enjoyable to read reviews about any of their inks.

That is a very radiant yellow. Contrasts a lot with the Candle Day ink you reviewed a few months ago. Nice, but I’m interested in seeing some reviews for salmon or cherry blossom pink inks, if possible.