The limited edition Visconti London Fog Pen design has just been announced by Visconti. This clear demonstrator version of the Visconti Homo Sapiens has the same shape, a new color scheme, and is limited to only 888 pens worldwide. 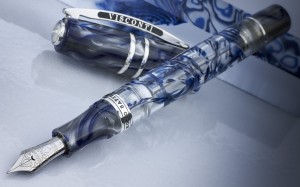 The Visconti London Fog cap and section combine blue and grey celluloid swirled together while the barrel of the pen is more transparent but shares the same blue color. The pen is then finished with 925 sterling silver trim for a truly special writing instrument. The pen comes in your choice of fountain pen or rollerball pen and both come in a luxurious wood gift box.

Visconti is an Italian pen manufacturer and has been hand crafting fine writing instruments since 1988. They have used many unique and revolutionary materials for their pens such as volcanic lava on the black version of the Visconti Homo Sapiens pen, available in two sizes with different trim color options. The Homo Sapiens has been a huge success and one of Visconti’s most popular pen designs. This new limited edition color, London Fog, is to projected be very popular as well.