The Pelikan Pen Company continues to impress with its ever expanding Souveran collection of fine writing instruments with the new Pelikan Souveran 805 Stresemann fountain pen. Pelikan has just introduced a complete line of Stresemann pens as fountain pen, rollerball pen, and ballpoint pen becoming the latest in Pelikan’s most popular line of pens. 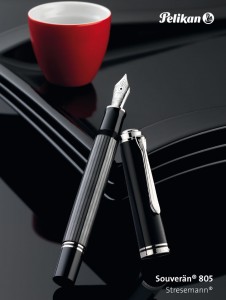 The Pelikan Souveran 805 Stresemann is named after the well known and revered German National, Gustav Stresemann, who lived from 1879 to 1929. Stresemann is a well known political statesman, who worked diligently within the European Nations after World War I towards peace. During his political days he served as the foreign minister of the Weimar Republic. His efforts towards peaceful reconciliations between various European Nations after WWI earned hims the Nobel Peace Prize in 1926.

Mr. Stresemann was so revered that his personal preference for wearing a more comfortable suit, which was still deemed sufficient for proper official governmental work, became a fashion influence. Mr. Stresemann’s has also become identified with the creation of a new type of suite which had thin lines of stripes on it. This modern look he initiated became identified during this period as “Stresemanns”. Additionally, fountain pens with stripes on them also were known to be called around the world as “Stresemanns”. 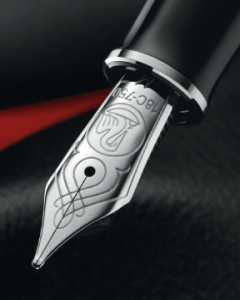 It’s no wonder that Pelikan has acknowledged Gustav Stresemann’s legend with an iconic Souveran stripped pen! The Pelikan Souveran 805 Stresemann fountain and roller ball pens come with a black cap with chrome (palladium plated) trim, clip and rings. The barrel of the pen is made of Pelikan’s well known and loved anthracite black and grey stripes made of cellulose acetate, with a 18 carat gold Pelikan nib, which has been rhodinized to achieve the permanent silver gleam. The ballpoint version of the Pelikan Souveran 805 Stresemann is flipped with the striped barrel towards the top of the pen.

This pen is an elegant reminder of years gone by and is simple, elegant, yet complex and a wonderful historic reminder of an incredible statesman who stood for peace. Pen Chalet is accepting pre-order for the Streseman pen today, and will ship mid to late February, 2015 as soon as they are released from our US distributor. 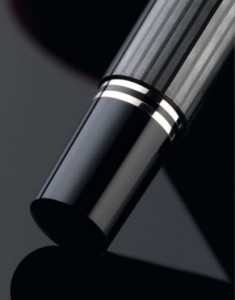