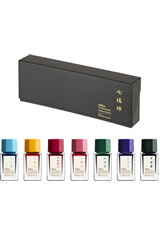 The Pilot 100th Anniversary LE Mini Boxed Set Fountain Pen Ink comes in a set of 15ml bottles with each of the seven colors. This limited edition ink commemorates the 100th anniversary of Pilot pen founded in 1919.


Colors include:
Ebisu (Light Blue): Ebisu, the god of plentiful fishing, now regarded as the god of happiness and prosperity. The light blue reflects the color of the sparkling sea.

Daikoku-ten (Yellow): Believed to be the god of treasure, Daikoku-ten has been depicted in sitting on a yellow straw rice bag on the fountain pen design.

Bishamon-ten (Red): Bishamon-ten, the god of financial good fortune. The red ink echoes the flames emanating from his halo depicted on the fountain pen.

Benzai-ten (Coral Pink): Benzai-ten, the only goddess among the Seven Gods of Fortune. The god of wisdom is depicted with a coral pink Kimono on the fountain pen.

Juro-jin (Purple): Juro-jin, know as the god of longevity and prolonged life, the purple color echoes the color of the Juro-jin’s Kimono, depicted in the fountain pen.

Hotei-son(Black-Green): Hotei-son, know as the god of good fortune and matrimonial happiness, the green-black color represents Hotei-son’s necklace, depicted on the fountain pen.

Fuku-roku-ju (Green): Taoism’s three virtues are health and longevity, are known as Fuku-roku-ju. Worshipped today as the god of personal virtue, Fuku-roku-ju green ink echoes the color of the turtle, depicted on the fountain pen, on which Fuku-roku-ju is riding.

Overall rating:
4.8
out of 5
(1 reviews)
The Pilot 100th anniversary inks were greatly anticipated. The colors are beautiful, even better than they appeared in the literature. I particularly like the 15 ml bottles
Howard
Kingsland, GA
5 out of 5

Save on your 1st order

Sign up for our newsletter &
receive an instant coupon!